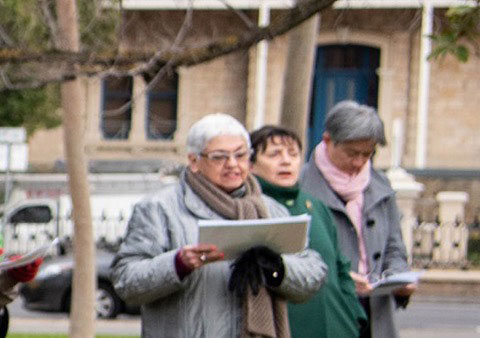 August 2020 was a sobering and important month with many around the world taking time to reflect on the horror and devastation of the bombing of Hiroshima (6 August) and Nagasaki 9 August) 75 years ago, and to stand against the ongoing existence of nuclear weapons. Read more …

In Adelaide peacemakers gathered in the Peace Park for the annual commemoration of the inhumane atomic bombings, which is organised by the Peace Foundation and the Romero Community.

We were happy to see new participants. Our speaker Lani Coy (a student from Flinders University studying Law and International Relations) spoke of her moving experiences in participating at the Hiroshima Peace Memorial Ceremony in Hiroshima 2019.

Senator Penny Wong also attended, posting on Facebook: “Today we remember the devastating impact of the Hiroshima and Nagasaki nuclear bombings 75 years ago. Ridding the world of nuclear weapons remains a humanitarian and global security imperative. Australia must lead international action to help drive progress to solve this global challenge.”

Participants were also asked to stand with ICAN by encouraging councils to take a public stance to keep cities safe against nuclear weapons by signing the UN Treaty on the Prohibition of Nuclear Weapons (TPNW).

ACTION: We ask you to support ICAN by approaching your local government councils to sign the Cities Appeal and thus persuade the Federal Government to sign in support of the TPNW.

Remember a nuclear weapons strike, whether intentional or accidental, from any (let alone all) of the current 14,000 nuclear weapons in the world, would bring about the total destruction of life on earth.