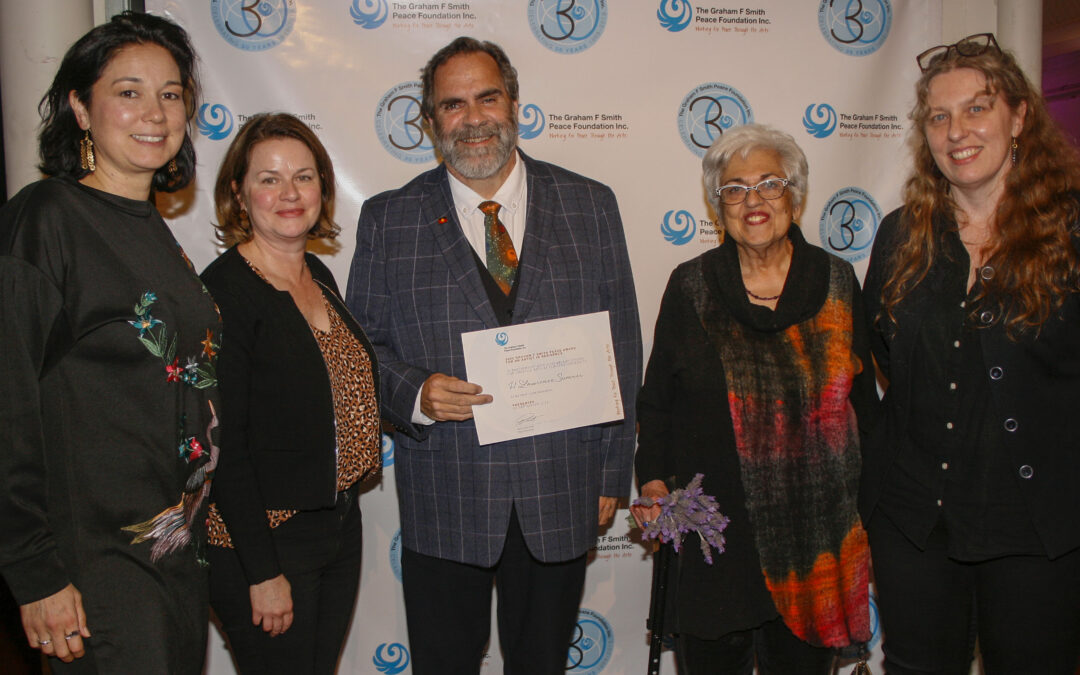 Katrina Power started the evening with a welcome to Kaurna Country, a land that has never been ceded. Wesley followed with an oration about the importance and meaning of storytelling to give people a sense of belonging, drawing on his personal experiences. He delved deeper into aspects of the arts and social justice through adroit questioning from Associate Professor Simone Ulalka Tur, Pro-Vice Chancellor (Indigenous), Flinders University. The evening was graciously emceed by Garry Stewart, former director of Assemblage and internationally recognised choreographer.

An important part of the Adelaide cultural landscape is the presentation of the 2022 Graham F Smith Peace Award for an Artist in Residence.

We are excited to announce that playwright Howard Lawrence Sumner is the recipient of this year’s award for his play The Seven Sorrows of Mama Booke (in development).

The award selection committee unanimously agreed on this outstanding recipient and was taken by the bravery and truth-telling of the work. The residency will support Howard in developing the script through collaboration and a socially-engaged arts practice.

The Seven Sorrows of Mama Booke is a direct response to the Royal Commission into the Protection and Detention of Children in the Northern Territory. It goes to the heart of the over-representation of male offenders in the juvenile justice system. This work speaks directly to Indigenous Justice.

On accepting the award, Howard said, ‘the work I am doing I wrote as a direct response to several issues. One was the banning of spit hoods, the other was my work as a field officer in the Aboriginal Legal Rights Movement.

So this week, when I was reading Graham [Smith’s] book, which spoke to me, the title as well, Speak Up, Reach Out, A Life to Reckon With. There are stories in it that relate to that young girl’s story, and to my story, where over the years, I have bashed my head up against justice, education and arts because I am a fairly opinionated person. I have no problem being that type of person because of that young girl’s story.

My play Spit Hood, which I had to rename to Seven Sorrow of Mama Booke because there is another project called Spit Hood. Those Catholics in the room will know that I am referring to the seven sorrows of Mary.

One of the images in my play is of an Aboriginal mother holding her son’s body, who has died in custody. She is sitting in the chapel, and this nurse says, ‘what is it about this that has shaken you so much, and how have you got so much peace? Why in this room do you find such power? And she [the Aboriginal mother] points up to the pieta, the image of Mary and Jesus in her arms, and says, ‘don’t you recognise deaths in custody when you see one?’

I have used those allegories throughout the play to speak, and to have a voice. I try not to waste my words and the opportunity to write about the issues that I want to write about.

That’s mainly because of that young 11-year-old girl who kneeled in the dirt, with her hands tied and sand in her mouth, and her name was Dorothy Sumner; and she was my mother.’

Our board chair, Naomi Ebert Smith, acknowledges Howard’s openness in sharing this deeply moving story as motivation for his work. She said the Peace Foundation is tremendously excited to see what will emerge as part of the residency at Assemblage, Centre for Creative Arts.