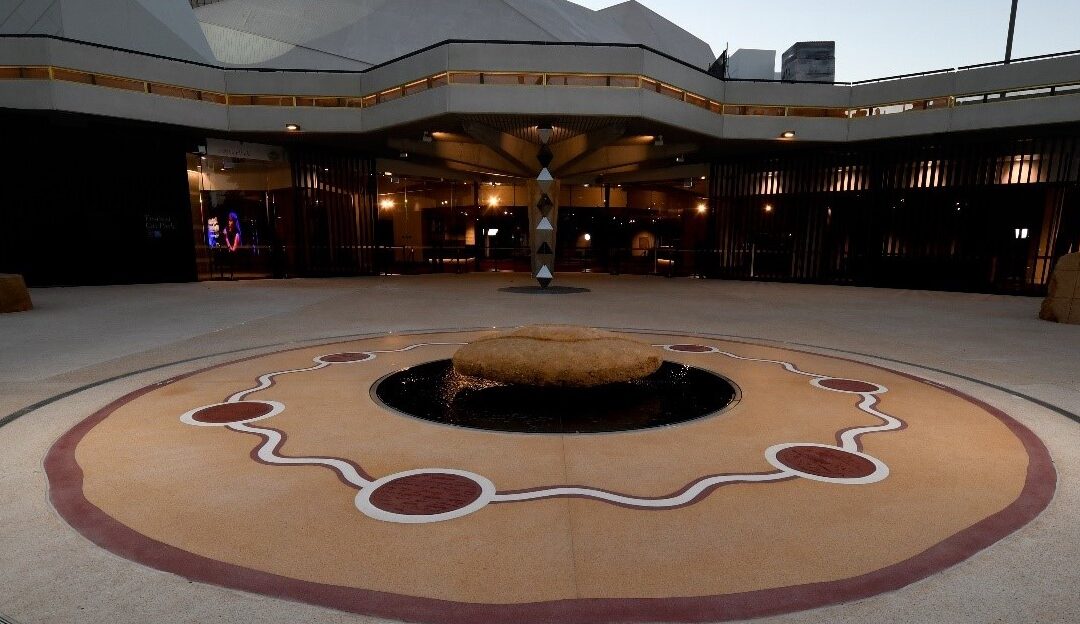 After a long five year absence, the Kaurna Reconciliation Sculptures have been returned to the entrance of the Adelaide Festival Centre (AFC) – to once again publicly recognise Kaurna people and Kaurna land.

In a moving ceremony held on Saturday 12 February, the sculptures were officially rededicated to the Kaurna people, with invited guests gathering to celebrate the significant occasion.

“These sculptures recognise Kaurna people’s connection to this country, and through the art, we share the stories, history, language, beliefs, and laws, which the Kaurna people live by. When we use our [observing] eyes, and our enquiring ears we gain greater connection to a millennium of cultural wisdom and knowledge,” said Uncle Mickey.

In her address Naomi said the Peace Foundation is proud that this reconciliation gift so rightly honours the Kaurna people and acknowledges the past, present and future of Kaurna culture and traditions.

“It was always hoped that [they] would be something that was a powerful symbol of healing, a focal point for reconciliation, cultural activities – and one that told a story or two,” she said.

She also thanked the collaborating artists who were commissioned to design and craft the sculptures back in 1997 and undertook the recent restoration work – Tony Rosella, Eileen Karpany, Darren Siwes and Donato Rosella.

Admiring the sculptures in their new location Leonie Ebert said “The Peace Foundation is most thankful that the Kaurna Reconciliation Sculptures are rightly back on Kaurna land after five years in storage. They are a powerful symbol of reconciliation and healing between Kaurna and the people of South Australia.

“The Kaurna Sculptures being reinstated at the front entrance of Adelaide Festival Theatre will once again be the focal point of communicating some of the Kaurna story visually, forcefully, and sensitively and the start of the Kaurna Walking Trail.”

Originally commissioned and funded by the Peace Foundation in a valued partnership with the Kaurna community, Adelaide Festival Centre Trust and the collaborating artists, the Kaurna Reconciliation Sculptures recognise Kaurna People and Kaurna traditional ownership and custodianship of the Adelaide Plains.